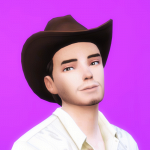 Hey Guys, I'm Jruoy98 and I'm a huge Big Brother fan. I'm also an admin here so feel free to message me if you have questions and concerns, or if you just want to talk casually. Feel free to contribute information about Big Brother as well!

In 2014, I became curious about other international versions of Big Brother and I was hooked in watching Big Brother Australia after watching its 10th Season. In the same year, I started watching Big Brother US which I initially found confusing because it has a different format from what I'm used to, but I eventually grew to love and understand the North American gameplay.

There are two things that I love the most; Sims and Big Brother. So, why not bring Big Brother in my Sims world? So the premise is the same as the real show but the houseguests will consist of Sims living together inside an enclosed house. So basically I play Big Brother and the sims are my houseguests. I can't control the way they socialize, their performance in challenges, who they want to evict and their moods. The last remaining Sim wins.

Retrieved from "https://bigbrother.fandom.com/wiki/User:Jruoy98?oldid=211477"
Community content is available under CC-BY-SA unless otherwise noted.