The Unitard is a recurring item in Big Brother. It is attire that is usually a form of punishment that a houseguest can receive as a result of a Power of Veto competition (and in some cases a Head of Household competition). The House Guest that wins it will usually have it wear it for the remaining duration of the week. The Red Unitard was used in seasons 8 through 10, and a different version has appeared in every subsequent season. It is usually won in the Yankee Swap competition.

The unitard was won by Sheila Kennedy in the Week 4 Power of Veto competition, Color of Veto.

The unitard was won by Michelle Costa in the Week 4 Power of Veto competition, Big Brother Slapshot.

This is the first variation of the unitard. This unitard featured oversized goggles, a black cape, and gold shorts with "Captain Unitard" written across the front of the top. It was won by Lydia Tavera in the Head of Household competition, HOH Invitational Golf Tournament in Week 6.

This was the second variation of the unitard, which was tie-dyed and dubbed the "Hippietard". It was won by Kristen Bitting in the Week 4 Power of Veto competition, The Wizards of Pinball.

This is the third variation of the unitard, which was green, donned with a pink tutu, a dunce cap, and had "I'm with stupid" written on the front. It was called the "Humilitard" and it was won by Jordan Lloyd in the Week 6 Power of Veto competition Big Brother Cornhole.

The fourth variation was won by Frank Eudy in the Week 4 Power of Veto competition, Field of Veto. This one was purple with "BBU" written on the front and donned with a blue and white skirt. It was called the "Spiritard".

Candice Stewart was given a clown unitard, or "Clownitard," to wear as a punishment after the Week 6 Power of Veto competition, Frog Darts.

Nicole Franzel was given a "Germitard" after winning it in the Week 4 Power of Veto competition, BB Cup. The Germitard was a German folk costume and came with a large sausage attached to a pitchfork and a beer stein.

Jackie Ibarra was given a "Knight in Shining Armortard" after winning it in the Week 6 Power of Veto competition, Game of Throws. The Knight in Shining Armortard was a silver unitard with a helmet, knight armor, and a shield, it also came with Vanessa Rousso becoming her "squire" and being shackled together for the next 24 hours cleaning Jackie's shield, armor, and helmet. After the 24 hours were up, Vanessa was allowed to remove the squire costume, but Jackie had to continue to wear the armor for the rest of the week.

Nicole Franzel was given a Super Safety Costume after winning it in America's Care Package in Week 8, along with immunity for the week. The SSC is made up of an orange unitard with a yellow cape, and a traffic cone hat, along with some reflective tape that can light up.

Jason Dent was given an "X-tremitard" to wear after winning it in the Week 7 Power of Veto competition, BB Adventure Tours. A blue, pink, and yellow unitard, with a yellow helmet and a giant pink X on the top, and the words on the chest make it spell out "X-treme".

Kaycee Clark was given a Pinwheel Unitard to wear after coming in last place during the season's opening competition, The Trash Folder. It was rainbow colored and came with wings attached to the arms, blue shorts, and a pinwheel over the torso. To add to the punishment, whenever the pinwheel, dubbed as the "Pinwheel of Doom" began to spin, Kaycee wasn't allowed to leave whatever room she was in until it stopped.

Later, after winning it in the Week 6 Power of Veto competition, Boom Power Trip, she was given a "Health Nut-itard", which is a tan unitard that says "Space Pecs" on both arms, and an additional peanut costume to go on top of it, complete with two giant dumbbells and a yellow headband that also reads "Space Pecs". This marks Kaycee as the first person to wear two unitards in one season.

Tommy Bracco was given a BB Explorer Costume to wear after winning it in the Week 6 Power of Veto competition, Tossed in Space. It is a gray unitard meant to appear as a rocket ship. It reads "BB Explorer" on both arms and has black dots around the neck representing bolts, and a blue circle with a silver outline, and more "bolts" within the outline, representing the window. It also has two red parts protruding from the torso and one in the back to represent the legs of the rocket. It also comes with flame styled shorts, with a silver skirt around the waist, containing more "bolts" around the top and bottom. It has a large, red cone shaped hat to represent the nose of the rocket. In conjunction with the punishment, there will occasionally be two giant cans strapped to the forearms. The cans also read "BB Explorer" along the sides and can either be fully functional flashlights or contain stink bombs that release a strong, unpleasant odor, depending on the task Tommy must complete.

Janelle Pierzina was given the All-Star Mascot costume, after being chosen as a +1 by Kaysar Ridha in Week 1. The outfit includes a yellow pointy hat, which has small LED lights covering the sides of it. The bottom part is a large yellow colored star, which has two large eyes and a mouth. Covering the sides of it are also LED lights. The lights shine yellow lights. Under the star outfit, Janelle also wore another gold colored unitard. It was a short dress with short sleeves, that she could wear while sleeping or doing activites.

Nicole Franzel was given her third unitard in her BB career, the "slopitard". 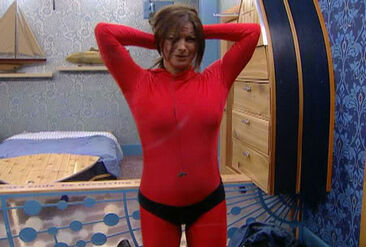 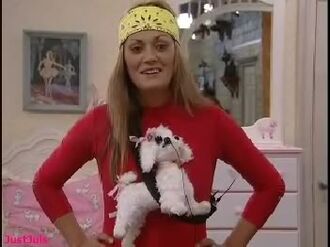 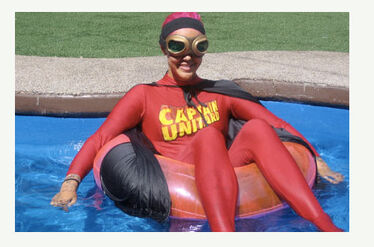 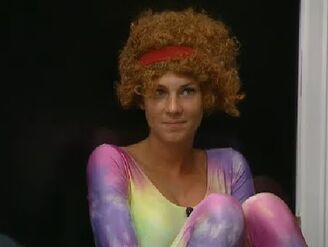 Kristen Bitting in the "Hippietard" (BB12) 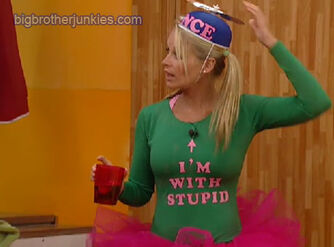 Jordan Lloyd in the "Humilitard" (BB13) 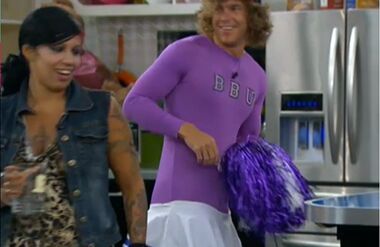 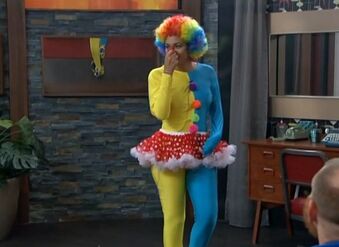 Candice Stewart in the "Clownitard" (BB15) 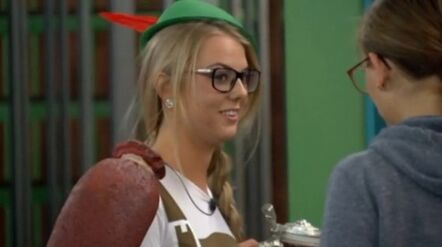 Nicole Franzel in the "Germitard" (BB16) 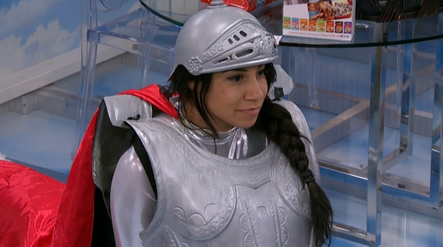 Jackie Ibarra in the "Knight in Shining Armortard" (BB17) 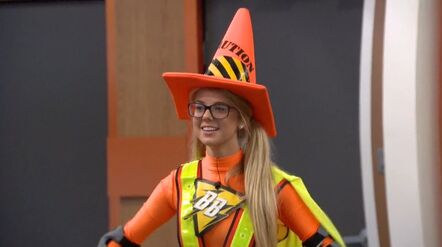 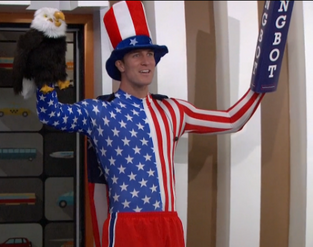 Corey Brooks in the "Patriotard" (BB18) 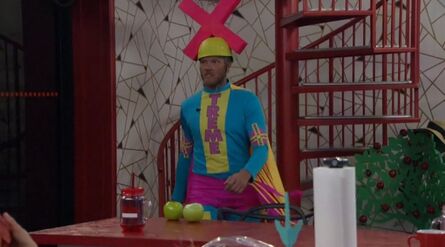 Jason Dent in the "Extreme-itard" (BB19) 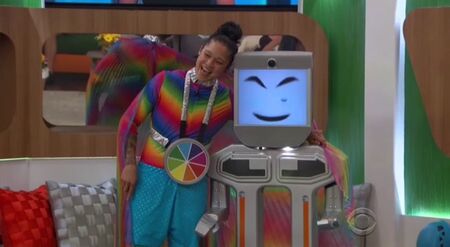 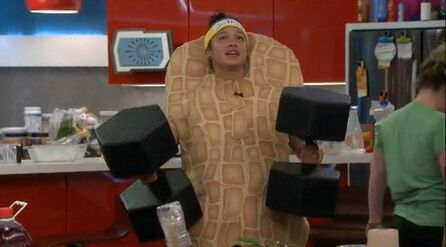 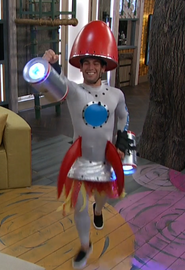 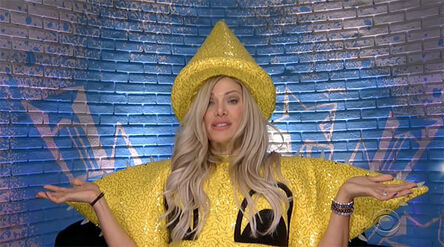 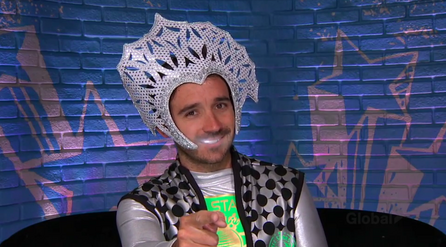 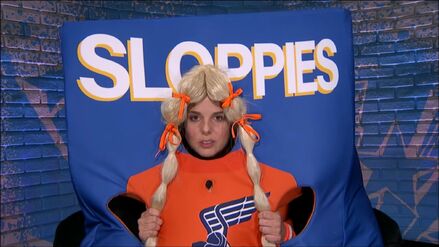 Nicole Franzel in the "Slopitard" (BB22)
Add a photo to this gallery
Retrieved from "https://bigbrother.fandom.com/wiki/Unitard?oldid=249592"
Community content is available under CC-BY-SA unless otherwise noted.