A secret Power of Veto that could remove a houseguest after the normal Veto Ceremony was complete.

The Secret Power of Veto was a hidden Power of Veto that impacted the game in Big Brother Canada 2. It was found by Allison White in the War Room.

It changed nominations in Week 7, that ended up with Sabrina Abbate vetoed off the block and Adel Elseri taking her place. 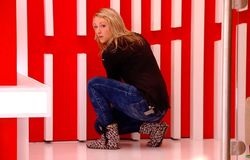 Once the Secret POV was unleased, various clues was released among the inside of the house. Allison was the first to discover the new flower on the second floor and found a clue to the Veto. It then led her to the pool and eventually along more clues till it lead her to the wall beside the stairs.

Once Allison pulled the correct object on the door the door opened to the secret room, aka the War Room, where she spent a week in before she was let inside of the house. She entered and Arisa Cox came up on the screens inside of the room, and gave Allison the final clue. It was easy for her to find it and Allison received the Secret Power of Veto.

In week 7, Jon Pardy won the Head of Household and nominated both Sabrina Abbate and Rachelle Diamond for eviction. Jon eventually won the Normal Power of Veto that same week and removed Rachelle from the block and back-doored Arlie Shaban. Then just as Jon was adjourning the Veto Meeting, Allison rose and to everyone's shock and pulled out the Secret Power of Veto. She attempted a power move and used the Veto on Sabrina and Jon was forced to nominated his best friend Adel Elseri.

At the eviction, she went back on her word and decided to go with the house and vote out Arlie with a unanimous 5-0 vote sending him to Jury. The houseguests immediately competed in the Head of Household competition, as Neda Kalantar was declared the winner. Neda was immediately sequestered in the War Room for the upcoming Instant Eviction. Neda decided to nominate Allison because she deemed her untrustworthy, because of her Secret Power of Veto. Allison was then instantly evicted by a unanimous vote sending her to Jury after just less than a day of her sucessful back-door of Arlie.

Retrieved from "https://bigbrother.fandom.com/wiki/Secret_Power_of_Veto?oldid=152030"
Community content is available under CC-BY-SA unless otherwise noted.