After 56 days, Keanna Reeves emerged as the season's Big Winner, becoming the first celebrity to win the title.

A special casting was held for this season wherein the final 14 were eventually chosen. According to show's director, Laurenti Dyogi, the casting calls began in December 2005. The casting was opened to celebrities who wanted to audition, but there were also some celebrities who were invited to be part of the show.

The celebrities who auditioned include athletes, stand-up comedians, ramp and commercial models, musicians, and TV personalities.

In addition, aside from the nationwide famous Manila-based celebrities, there were also regionally famous celebrities from Visayas and Mindanao who became part of the cast.[1]

Initially, Willie Revillame, Toni Gonzaga and Mariel Rodriguez reprised their hosting roles in Pinoy Big Brother. However, due to an unexpected tragedy in Willie's afternoon variety show Wowowee, he immediately decided to leave Pinoy Big Brother a day before the live premiere.

After his sudden departure, Toni Gonzaga who originally narrated the weeknight primetime episodes last season, took over Willie's role as the main presenter of the series and hosted the live eviction and nomination nights as well.

The series was originally scheduled to start a day before on February 4, 2006 but due to the Wowowee ULTRA stampede tragedy that happened earlier that day, the management rescheduled it the following day, February 5, 2006.

In this season, the show introduced a new theme song specially used for celebrity seasons of the series. "Sikat Ang Pinoy" (lit. Filipinos Are Famous) was first performed by Sam Milby and Toni Gonzaga on the season's live premiere. It has been used throughout the season, but the original theme song of the series Pinoy Ako was still occasionally used. 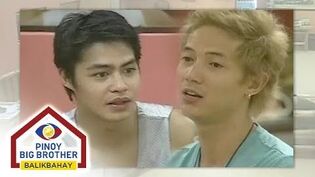 The layout and overall interior design of the Big Brother house remained unchanged from Pinoy Big Brother 1, except for a fact that the house was empty when this season's celebrity housemates entered, with only few basic, utilitarian furniture made of bamboo.

This season's house concept was "back to basics". To give the celebrity housemates a back to basics experience, they entered in an empty house having only basic household items, with the exception of the Plasma TV and the Refrigerator and the Confession Room chair. They were only allowed to get water from an old fashioned water pump, use a stick for brushing their teeth, use bare hands for eating and use a makeshift outdoor kitchen for cooking. The swimming pool was empty when they first entered, and must fill it up manually with water from the water pump as their first task.

After two weeks, Big Brother lifted the "Back to Basics" twist after seeing the housemates adapting to the said lifestyle, despite difficulties. The Forbidden Room, a pink-walled room with beds and mattresses reserved only for eviction nominees, became the ladies' bedroom, while the bamboo beds in the eventual men's bedroom were suddenly covered with mattresses. They were then provided with a microwave oven, an electric stove, utensils, and some toothbrushes and were allowed to use the swimming pool at any time, as well as wearing footwear indoors. Later, sofas replaced the bamboo benches in the living room.

Garden Area
Add a photo to this gallery

Retrieved from "https://bigbrother.fandom.com/wiki/Pinoy_Big_Brother:_Celebrity_Edition_1?oldid=250101"
Community content is available under CC-BY-SA unless otherwise noted.