The Weirdos
The Rationale

Nicole Ann Franzel-Arroyo (née Franzel) is the winner of Big Brother 18 (US). She first appeared on Big Brother 16 (US) and later returned for Big Brother 22 (US).

In Big Brother 16, Nicole became best known for her showmance with Hayden Voss, and being a competiton threat: winning 3 Head of Household and 2 Battle of the Block. After her ally Jocasta Odom was blindsided during the first half of the first Double Eviction, Nicole was left on the bottom along with Hayden and Donny Thompson. She and Hayden were nominated during the second half of the first double eviction, and Hayden was evicted. In Week 7, she managed to win HoH, but she was dethroned and later backstabbed by her friend Christine Brecht, who nominated her against Donny. She was evicted in an unanimous 6-0 vote. However, she managed to return to the house by winning the Jury Buyback competition one week later. In Week 9, she was nominated against her ally Donny, once again, but ultimately survived eviction. In Week 10, she became a pawn against Christine. Despite Christine winning the Power of Veto, Derrick Levasseur wanted to keep her, and HoH Caleb Reynolds wished to backdoor Frankie Grande. However, after Nicole told Derrick he reminded her of Dan Gheesling, he decided to turn on her. He convinced Caleb not to backdoor Frankie, and Caleb nominated Nicole's last remaining ally, Victoria Rafaeli. She ultimately was evicted for the second time, in an unanimous 4-0 vote during the first half of the second double eviction. She finished in 7th place and was the 5th member of the jury.

In Big Brother 18, she became best known for her under the radar gameplay, showmance with Corey Brooks, and avoiding nomination until Day 91. She joined the 8-Pack alliance in Week 1. Nicole was in a comfortable position throughout the first half of the season, and subtly convinced others to do what she wanted, all while avoiding blame and covering her tracks. However, when her ally, Zakiyah Everette was blindsided in the first half of the double eviction, Nicole along with Corey and Paulie Calafiore were on the outs. However, they regained power during the second half of the double eviction as Corey became the Head of Household. Paulie was evicted in Week 8, leaving Nicole and Corey on the bottom. Despite being in the minority, and the obvious targets in the following week, they managed to survive when Nicole convinced HoH Natalie Negrotti to target Paul Abrahamian and Victor Arroyo. When Paul won the PoV and Corey went up as the replacement, they managed to convince James Huling, who was the swing vote, to align with them and evict Victor. However, after Victor returned by winning the jury buyback, and Nicole became the HoH, she and Corey began playing the middle between Paul and Victor and James and Natalie. She ended up casting the tiebreaker vote to evict Michelle Meyer. In Week 11, when Victor became HoH, she joined Corey and Paul in taking Natalie out. However, after Corey won HoH at the final 5, he and Nicole decided to split up Paul and Victor, and worked with James to evict Victor for the third and final time. However, when Paul became the HoH at the final 4, Nicole was nominated for the first time against Corey. After Paul won the final PoV, he left the nominations the same. Nicole survived as James cast the sole vote to evict Corey. Despite losing part 3 of the final HoH, she convinced Paul to take her to the final 2 over James. Her behind the scenes gameplay, subtle persuasion, and the jury's distaste towards Paul's behavior won her the game in a close 5-4 vote. She became the first female to defeat a male in the final 2.

Despite entering Big Brother 22 as one of two previous winners, Nicole would join the dominant The Committee alliance, which kept her safe. She was close with Committee members Dani and fellow Big Brother 16 castmate Cody, having final 2 deals with both. She didn't really face heat until the Triple Eviction, in which she was nominated in the second and third rounds but managed to survive. At the final 5, she won her first Head of Household and Power of Veto of the season, which were key to evicting major threat, Memphis. Despite being nominated as the target by Enzo at the final 4, she was spared when Cody saved her and evicted Christmas. After losing the final Head of Household competition to Cody, she was evicted by the latter, resulting in her finishing in 3rd place, and as the 9th and final member of the jury. Nicole had a long-running feud with Janelle, and also had minor clashes with Kaysar, but developed friendships with Da'Vonne, Christmas, and Ian, including stronger ones with Cody and Dani. She played a hand in majority of the evictions and manipulated several Houseguests throughout the season.

Across all three of her seasons, Nicole has an average placement of 3rd place, has won 11 competitions total (6 HOH's, 3 PoV's and 2 BOTB compettions). Due to winning Season 18 and then making final 3 in Season 22, and her competitions wins, she is regarded as one of the best players in the modern era of Big Brother. 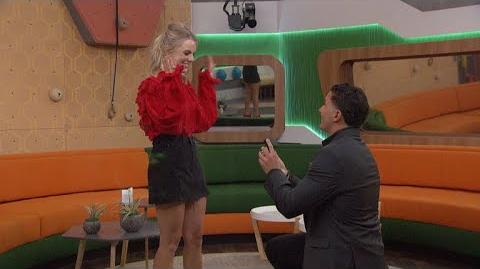