29
Kandi Burruss-Tucker[2] is a houseguest on Celebrity Big Brother 2 (US).

Retrieved from PopTV
Age: 42
Hometown: Atlanta, Ga.
Current City: Atlanta, Ga.
Occupation: Singer/TV personality
Three adjectives that describe you: Honest, dependable and chill.
Favorite Activities: Going to the movies, watching TV, going out to eat and playing board and card games.
What do you think will be the most difficult part of living inside the BIG BROTHER house? Being away from my family and friends and with no outside communication.
What moment in your career do you think prepared you to live in the BIG BROTHER house? Being in a girl group.
Do you have a strategy for winning the game? No strategy yet.
My life’s motto is… If you can conceive the thought, you can make it happen.
What would you take into the house and why?

Fun facts about yourself: 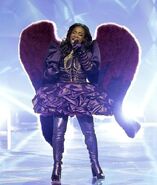 Kandi as The Night Angel, unmasked
Add a photo to this gallery

Retrieved from "https://bigbrother.fandom.com/wiki/Kandi_Burruss?oldid=219256"
Community content is available under CC-BY-SA unless otherwise noted.