This page is a candidate for deletion.

If you disagree with its deletion, please explain why at Category talk:Candidates for deletion or improve the page and remove the {{delete}} tag.

Remember to check what links here and the page history before deleting.

The title given to the person who gathered the highest number of votes from the public on the Big Night.

Every season of Pinoy Big Brother

The Big Winner is the title given to the housemate who has been awarded the victory of Pinoy Big Brother out of the Big Four finalists who reached the Big Night finale.

The only requirement for eligibility to win is to be part of the Big Four and reach the Big Night finale.

For every final week of the series, Big Brother usually test the remaining housemates in personal, situational and strategic aspects and is deemed the week where the public would be given second thoughts on who they want to vote for the finale.

But the public may vote for who they want to win based on various reasons; who is the most genuine or stayed true to themselves while inside the house hence the series' tagline, who stayed stronger out of the challenges given by Big Brother, who had the most character development throughout their stay in the house, who related to them the most etc.

Aside from those, other additional prizes have been received by winners of the previous seasons, either a business showcase, a kitchen showcase, Sony Bravia LCD TV, a scholarship program (applicable only for Teen Editions), and a brand new car.

However, being part of the Big Four wouldn't make a contestant leave penniless.

Just reaching the Big Four will guarantee any housemate of a cash prize and various prizes that vary from every season.

The evicted contestants receive a stipend or a consolation prize for being part of the season.

For every Big Night of the series, it has been a tradition that every Big Winner gets to have a grand exit/winning moment back to the outside world, with ways varying from season to season often in relation to the Big Night's annual theme.

Keanna Reeves' Grand Exit as she was carried from above onto the stage. 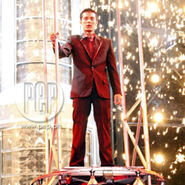 Ejay Falcon's Grand Exit. Surprised, he descended from the space-ship set-up at the center of the stage. 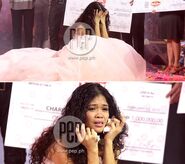 Emotional Melisa Cantiveros as she appeared on stage.

James Reid's Grand Exit, as he ascended below the stage in front of the replica of the Big Brother House.

Slater Young as he appeared on the replica balcony of the Big Brother House.

Myrtle Sarrosa's Grand Exit moment as she was carried by a moving platform on to the stage while sitting on the smaller replica of the season's Confession Room Chair.

Daniel Matsunaga's Grand Exit as he ascended below the bright star, matched with a choir singing the Pinoy Ako theme song of the series.

Jimboy Martin's Grand Exit as he was carried by a moving platform in to the stage.

Miho Nishida as she was carried by a moving platform in to the stage.

Maymay Entrata's Grand Exit Moment as she was lifted above through a small yellow house, made up of recycled bottles.
Add a photo to this gallery

Retrieved from "https://bigbrother.fandom.com/wiki/Big_Winner?oldid=176383"
Community content is available under CC-BY-SA unless otherwise noted.