This season saw the return of the Head of House from Big Brother Australia 8 to the show as well as multiple housemates leaving the Big Brother House each week.

Entering the last year of their contract, Channel 9 decided to create an upstairs for the first time ever. The only part of the house upstairs was the Diary Room. 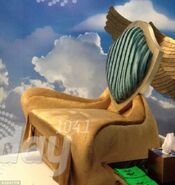 Note: The seed number refers to the order they entered the house. An "S" is a pair that was switched with another pair. Travis & Ryan were switched with Sam & Cat on Day 8.