ABS-CBN is a Philippine commercial television and new media network that airs the Philippine version of Big Brother, Pinoy Big Brother since its launch in 2005.

ABS-CBN (an initialism of the network's former names, Alto Broadcasting System - Chronicle Broadcasting Network) is a Filipino commercial broadcast television network that is the flagship property of ABS-CBN Corporation, a company under Lopez Group. The network is headquartered at the ABS-CBN Broadcasting Center in Quezon City, with additional offices and production facilities in 25 major cities including Iloilo, Cebu, and Davao. ABS-CBN is formally referred to as "The Kapamilya Network", a Filipino word which means a member of a family, and was originally introduced in 2003 during the celebration of the 50th year anniversary of Philippine television. It is the largest television network in the country in terms of revenues, assets, and international coverage.

Today, the flagship television station of ABS-CBN is DWWX-TV (ABS-CBN TV-2 Manila). The network operates across the Philippine archipelago through its ABS-CBN Regional diision which controls 80 television stations. Its programs are also available outside the Philippines through the global subscription television channel The Filipino Channel (TFC) which is now available in over three million paying households worldwide as well as terrestrially in Guam through KEQI-LP. Since 2011, the network is on test broadcast for digital terrestrial television using the Japanese standard ISDB-T in select areas in the Philippines. On October 3, 2015, ABS-CBN started to broadcast in high-definition on select direct-to-home cable television providers and later on direct-to-home satellite television.

On May 5, 2020, ABS-CBN's Free TV (Channel 2 and regional equivalents) and radio stations (DZMM 630 and MOR 101.9) across the country were ordered to shut down its broadcasting operations, in accordance with the decision of the National Telecommunications Commission in regard to the issue regarding the Philippine president, Rodrigo Duterte's refusal to renew the license of the network. [1][2] ABS-CBN officially went off air on the same day at 7:52 PM, after the primetime news program TV Patrol ended.

On June 2020, as ABS-CBN's main, free-to-air channel remains closed, ABS-CBN's shows resumed airing on the network's new channel Kapamilya Channel which started broadcasting via cable and satellite TV nationwide on June 13, 2020. The new interim cable channel is set to air shows that resumed production previously suspended by the country's community quarantine on March 15, 2020, in response to COVID-19 pandemic. Shows set to resume airing in the channel include drama series such as Ang Probinsyano, variety shows such as It's Showtime, and reality series such as The Voice Teens 2. [3]

ABS-CBN is one of the few television networks to successfully produce Big Brother around the world. Pinoy Big Brother currently had 13 seasons since its launch in 2005 all with high ratings. The series has been nominated for being the Best Reality Show, even winning the University of Santo Tomas's USTv Students' Choice Awards for the Student’s Choice of Reality Show category in Pinoy Big Brother 2.

On the first few seasons, ABS-CBN and the series were marred by various criticisms and controversies, even having a one-episode suspension during Pinoy Big Brother 1 due to its negative reputation in other countries but ABS-CBN were able to eventually transform the series to a more wholesome, family friendly format with an addition of moral life lessons given by Big Brother whenever he gives an advice to the housemates on their personal problems.

The series eventually had a huge impact in the country, forever changing the Philippine Television history. It resulted to ABS-CBN's rival network, GMA Network producing the Survivor Philippines in 2008 to counteract the consistent high ratings of Pinoy Big Brother. 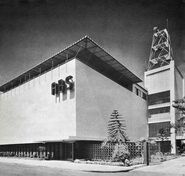 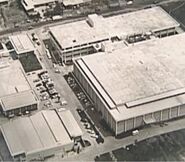 Current ABS-CBN Studios in 1960s after the merge.

ABS-CBN Main Building today.
Add a photo to this gallery

Retrieved from "https://bigbrother.fandom.com/wiki/ABS-CBN?oldid=243943"
Community content is available under CC-BY-SA unless otherwise noted.